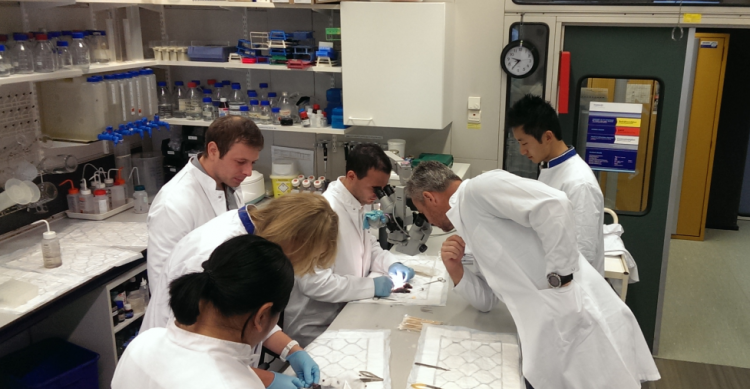 Submitted to: Estonian Assiciation of Orthopaedic and Trauma Surgeons

During 4-10 october 2015 I was able to participate at a EFORT Traveling Fellowship event in the Netherlands.

My early morning flight from Tallinn to Amsterdam on the 4th was delayed due to fog in Amsterdam by 2 hours. At midflight the passsengers were informed, that the fog hadn`t subsided and the plane is landing in Brussels. From Brussels we travelled to Amsterdam Schipol airport by bus from where I took the train half way back to Brussels – to Rotterdam.

After arriving at the hotel, which was at about 15 minutes’ walk from the train station, I was just about on time to meet the rest of our travelling fellowship group and our hosts Dr. D. Meuffels and Dr. Olav van der Jagt, who lead us to dinner at Rotterdam Euromast, where we were hosted the president of the Dutch orthopaedic society, Dr. H. Koot and the godfather of our edition of the travelling fellowship, prof. J. Verhaar. At dinner the fellows got Dutch wooden clogs and little porcelan houses as presents from the organizers.

On Monday the 5th the educational programme was at Rotterdam Erasmus MC. The main topic was sports injuries. Later on Monday and on Wednesday the fellows would give presentations of their home country and association – lots on new knowledge and fun! For lunch we had typical Rotterdam cuisine the bitterballs. Monday was continued by a guided bicycle tour around Rotterdam architecture and dinner in the evening.

On Tuesday our fellowship took us to Leiden, where we visited Leiden MC to learn about bone tumors, shoulder injuries and residency in the Netherlands. For lunch we had typical Leiden cuisine the bitterballs. The hosts gave us a guided tour in Leiden and prof. Rob Nelissen accompanied us for dinner.

On Wednesday the 7th we were back at Rotterdam Erasmus MC again to have a tour in the laboratory, the library and the emergency department. In the educational programme we learned about revision hip and knee surgery.

In the evening we travelled to Holland Amerika Lijn restaurant by rivertaxi to have dinner with our godfather Jan Verhaar.

On Thursday morning we travelled from Rotterdam to Amsterdam VUMC to learn about spine stability and tumors. A few months earlier the whole VUMC had been evacuated due to flooding. In Amsterdam bitterballs are known as usual Dutch cuisine. Later in the evening we had a nice boattrip accompanied by prof. B. van Royen on the canals of Amsterdam to our new hotel and to dinner restaurant.

On Friday we visited Amsterdam AMC to learn about elbow and knee trauma surgery, cavovarus and planovalgus foot surgical treatment and talar OCDs. Later we would have a guided tour in the old town of Amsterdam including the red light district.

On Saturday morning it was time to fly back home. Just a routine flight, no specialities.

It was a extremely nice week packed tightly with a widespread educational programme and social activities. I made friends with collegues with whom it was entertaining to discuss the similarities and differences of our countries, cultures and proffessional matters.

I am happy and thankful to have been there.